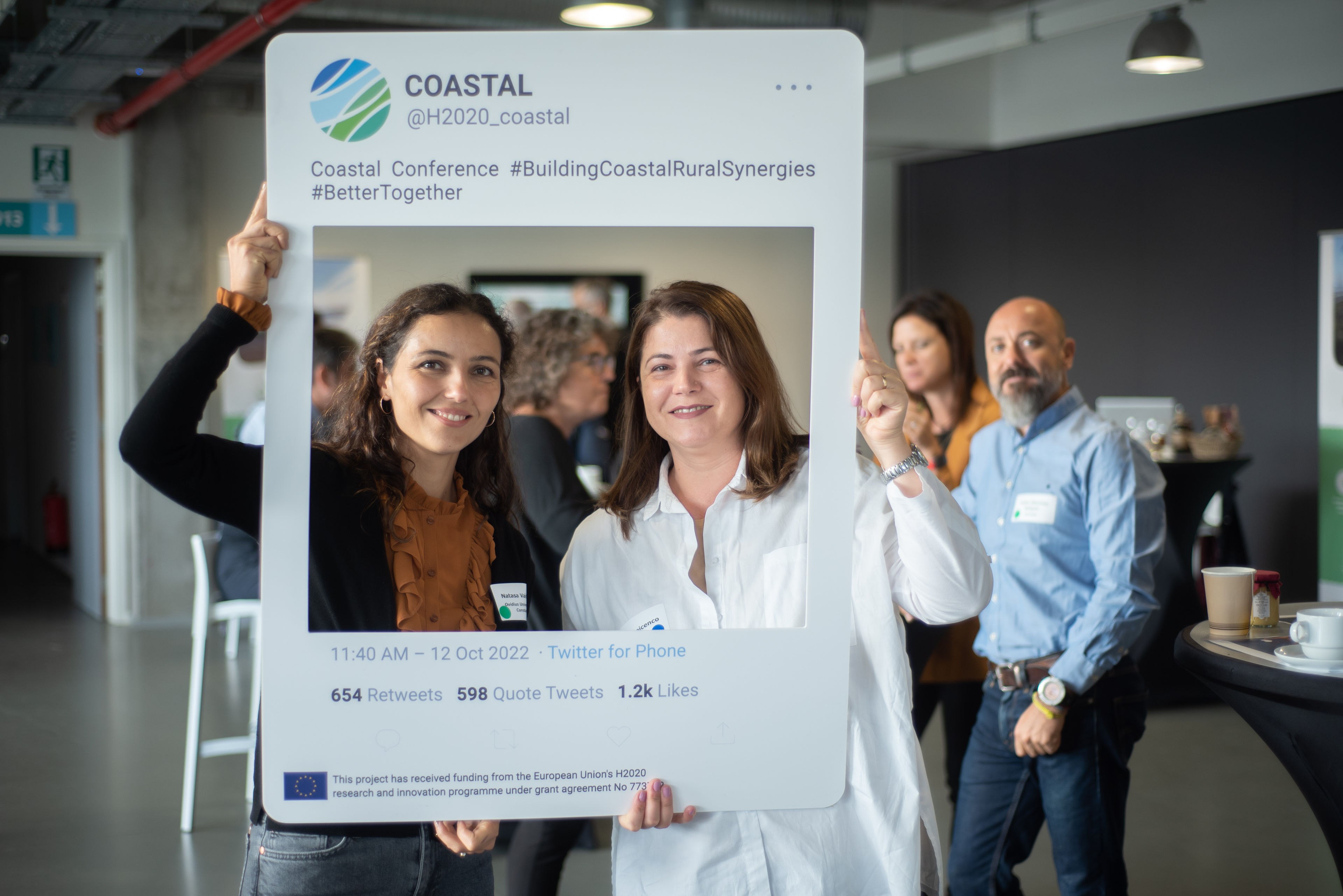 On 12th October 2022, COASTAL project partners celebrated the project's final hybrid conference at BlueBridge premises in Ostend Science Park, Belgium. The conference marked the end of COASTAL and provided all participants with an overview of the project's findings, research, main takeaways, and future expectations.

The event reflected the project's core ideas and modus operandi: we can only achieve change if we involve all relevant stakeholders and make them part of the story. Analogously, the event saw the participation of students, NGOs, businesses, and policy officers who represented either the coastal or rural sector.

The conference location could not have been better picked. During the welcome speech, Jurgen Adriaen, project manager at BlueBridge, stressed, amongst other topics, the economic importance of the Belgian coast for Flanders and the need to preserve it. In fact, despite the coast being only sixty kilometers long, the marine and maritime activities (e.g., aquaculture, offshore testing) that occur in the coastal region make up 4% of the Flemish's GDP. Moreover, the co-dependence that both green and blue economies have in this region make Ostend and its surrounding rural area, the Outlandpolder, an excellent location to inspire discussions on coastal and rural cooperation.

Shortly after, COASTAL's coordinator, Jean Luc de Kok, environmental researcher at VITO Belgium, briefed the audience about the successful combination of stakeholder engagement and system thinking to achieve the project's tangible results and outcomes. The project's main results can be summarised in the strong EU collaborations amongst diverse stakeholder groups, the creation of a platform that hosts a forum that fosters land-sea interactions amongst actors, and the development of evidence-based business and policy road maps.  All project results can be found here.

''In a society where we have to face socio-environmental challenges and sustainable spatial planning, system thinking is more and more important''

stated Jean Luc during his introductory speech. System thinking shows the connections amongst different issues with any studied scenario, even extreme cases such as droughts. It represents a way of thinking, and its modeling supports and fosters problem-driven discussions instead of knowledge-driven discussions with stakeholders. From multi-actor analysis to land-sea interactions to scenarios and modeling, COASTAL ends with policy and business roadmaps at the crossroads of many ongoing and future stakeholder discussions.

Following Jean Luc de Kok, Orsolya Frizon Somogyi, DG AGRI, and Juan José Ronco Zapatero, DG MARE, provided their views on coastal-rural cooperation and reminded the audience of the current actions and policies the EC is promoting. With 60% of European soil being considered 'unhealthy,' Orsolya highlighted how living labs, lighthouses, and events such as the Rural Pact could connect farmers and other key players to work together towards a healthier soil, one of Horizon Europe's missions. Similarly, testing, trials, and peer-to-peer learning are also incentivised, and diverse funding programs can provide support to make ideas a reality. On the other hand, Juan Ronco stressed how we should not push for more growth of the green and blue economies; we should focus on sustainability instead. Shifting from land to sea could be part of the solution to our current food crisis, considering that with less than 1% of Europe's waters, we could provide three times more seafood than we consume today.

COASTAL's final conference would not have been complete without an overview of what happened at the multi-stakeholder lab level across the six focus regions: the Belgian coast, Southwest Messenia in Greece, the Nördstrom region near Stockholm, the Charente river basin in France, the Danube mouths in Romania and the Mar Menor lagoon in Spain.

Following the project's methodology, all labs underwent the same process: dialogue with stakeholders, developing a scheme that would help detect which issues to focus on, and finally, studying those specific issues while developing models and scenarios. 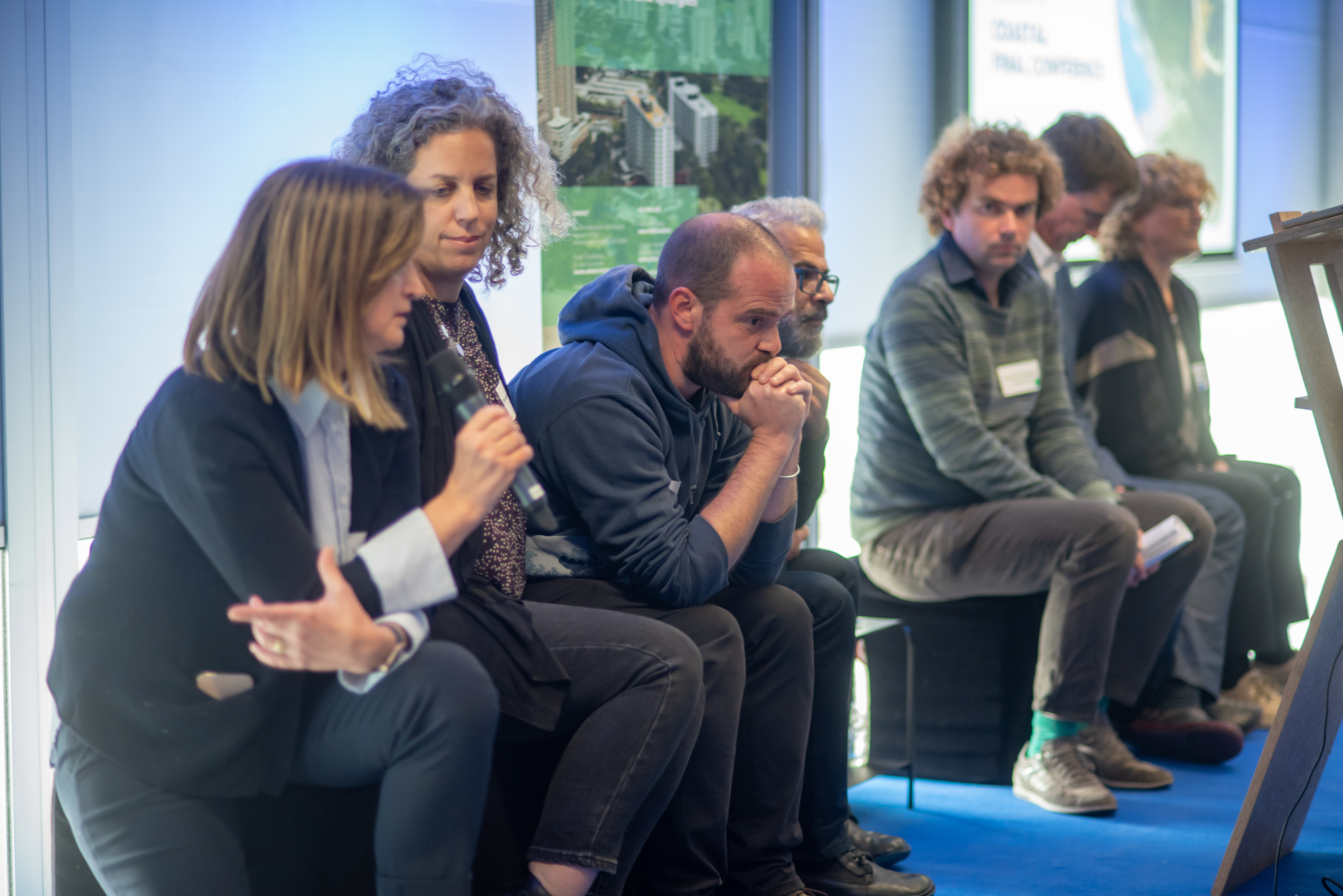 But what were the main issues and takeaways for the COASTAL regions?

Bastiaan Notebaert, researcher and project coordinator at VITO, stated that there is an increasing concern linked to rural and industrial gentrification and water level management (i.e., Peilbeheer) - especially since water in this region is usually below sea level. Solutions space from (1) maintenance and restoration of high-quality open space, (2) reserving space for water, and (3) keeping space for ecosystem recovery.

Erasmia Kastanidi, Hellenic Centre for Marine Research, and Giorgos Maneas, Stockholm University, brought the focus on sustainability and the importance of joined discussions. Bringing together people who had never met one another was one of the lab's main achievements: the labs helped participants develop a shared vision and a roadmap that have the region's well-being as an end goal. Their main suggestions are (1) the need to promptly implement restoration works, (2) to encourage cooperation amongst small-scale farmers, and (3) and to control spatial planning despite the growing tourism demands.

As Georgia Destouni, Stockholm University, said when opening her multi-stakeholder lab presentation, the secret to a happy marriage is to have 'something new, something borrowed and something blue'. Those elements are represented by the latest issues that climate change brought to the table, such as lack of water – something unheard of in Sweden; the co-creation process which COASTAL envisioned; and the water, which is the undisputed protagonist of COASTAL's work. Enhancing legacy sources and recycling and reusing nutrients may be practical ways to face the current issues.

Benoit Othoniel, researcher at INRAE, also noticed tremendous benefits from the stakeholder engagement process. One of the main conclusions from his research is that if the community made a joint effort, water shortages could be avoided, provided that sustainable and resilient use of water resources and economic activities is prioritised.

Luminita Lazar, senior researcher at the National Institute of Marine Research, stressed the concerns affecting the Danube Delta region, the second biggest wetland in Europe. The stakeholder meetings proved successful but marked only the beginning of much-needed communication and cooperation between different parties. One of the leading solutions could be to start intensive aquaculture. Aquaculture is not currently present in the region and could be highly beneficial.

Joris de Vente, senior researcher at the Spanish Research Council, also placed sustainability as a top priority. Joris found that the co-design process made people more willing to accept and implement changes, thus overcoming a fragmented view of the issues.

Nonetheless, all multi-actor lab representatives agreed on the need to bridge the gap between policymakers and research: the current concern is implementing the solutions, something that the rapidly changing political agendas should commit to.

In the afternoon, the coordinators of similar initiatives, Sherpa and Auroral, gave a good introduction to their work and results. While soon after, Juan Luc de Kok and Mariana Mata Lara introduced the Key Exchange Platform: COASTAL's way to make all the final results public in an easy and friendly manner.

The day ended with a lively panel discussion that featured Alexey Voinov, professor at the University of Twente; Céline Karasinki, rural development officer; Hannelore Maelfait, coordinator of the territorial office for the coast for the Province of West-Vlaanderen; and Ben de Pauw, project manager with a focus on blue growth.

Similarly to the multi-actor labs' ideas, the final panel also agreed on the importance of policy officers and politicians joining the discussions from the beginning to ensure their involvement beyond the time of their legislation. Also, raising awareness and teaching children about the effect of current energy and climate issues will provide conscious citizens in the future, while reducing expectations and lessening consumption should be part of the immediate solution. As Voivov stated,

''We need to shift from blue growth to blue economy; growth is simply not sustainable''.

What was Geonardo's role at the conference?