OTTER at the Festival of the New European Bauhaus

2022-06-20
Between 9 and 11 June, the OTTERs took part in the Festival of the New European Bauhaus, a celebration of the new creative movement that brings together art, science, culture and technology to create a better Europe under the motto "Beautiful | Sustainable | Together". 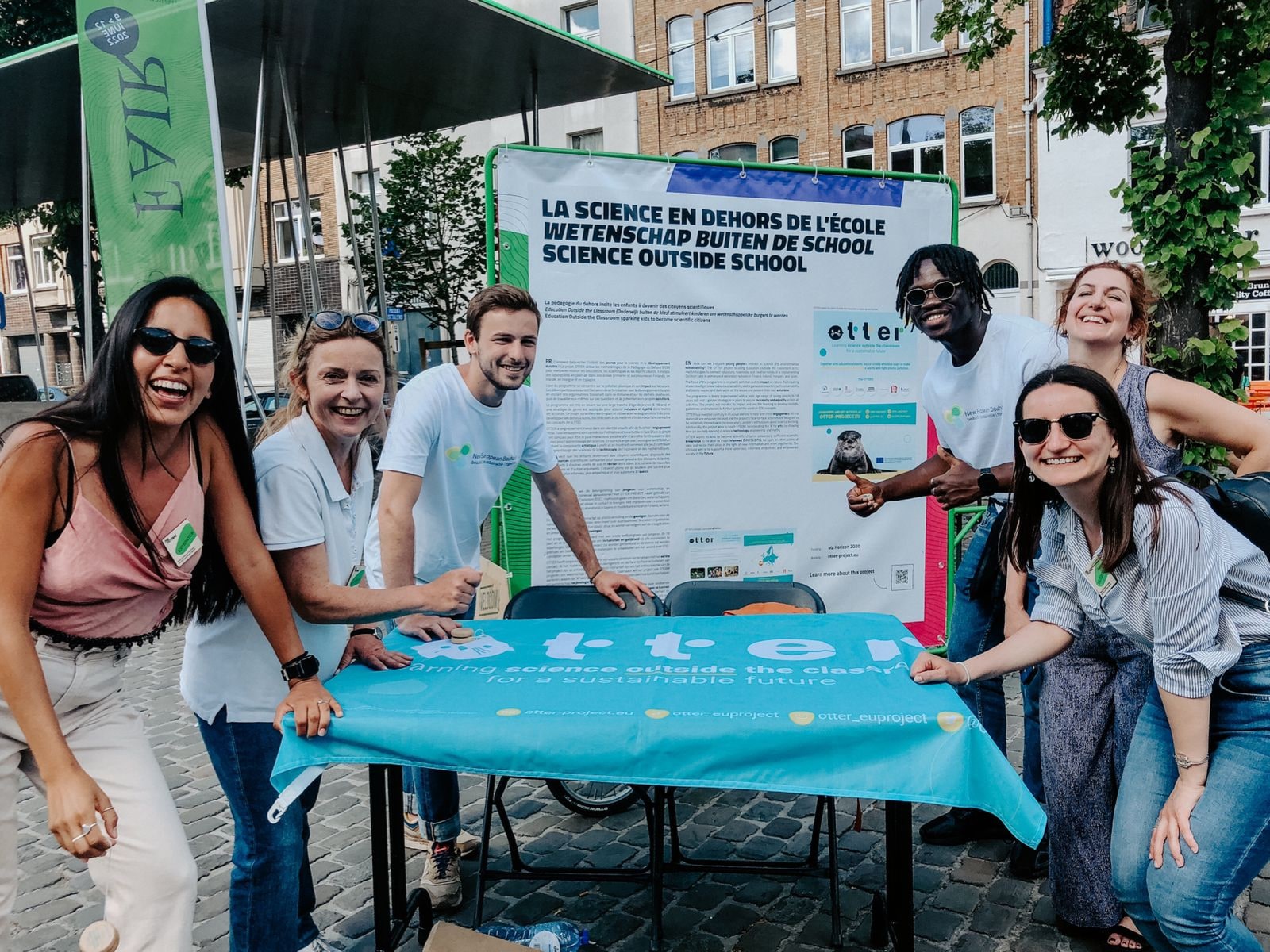 After much excitement at the news that we had been selected to join the Festival of the New European Bauhaus - an accomplishment that we are very proud of since we also work towards making Europe beautiful, inclusive and sustainable - and many days of preparation, the time had finally come for us to go to Brussels and get immersed into the world of the New European Bauhaus! Little did we know at the time how much we would come to enjoy the experience and how many creative and talented people we'd meet.

But let's start from the beginning...

On the morning of June 9, we set off to the Gare Maritime to meet the organisers, get our badges, and take a first look at the venue, who went on to be the site of the Fixed Fair. We were completely taken aback by the looks of the newly-restored Gare Maritime (both beautiful and sustainable, what could have been more appropriate for the event?). The former railway station was now hosting tens of original projects, each with their own booth, and the Forum, a dedicated space for thought-provoking discussions ranging from art to business and science, and the connections between them. 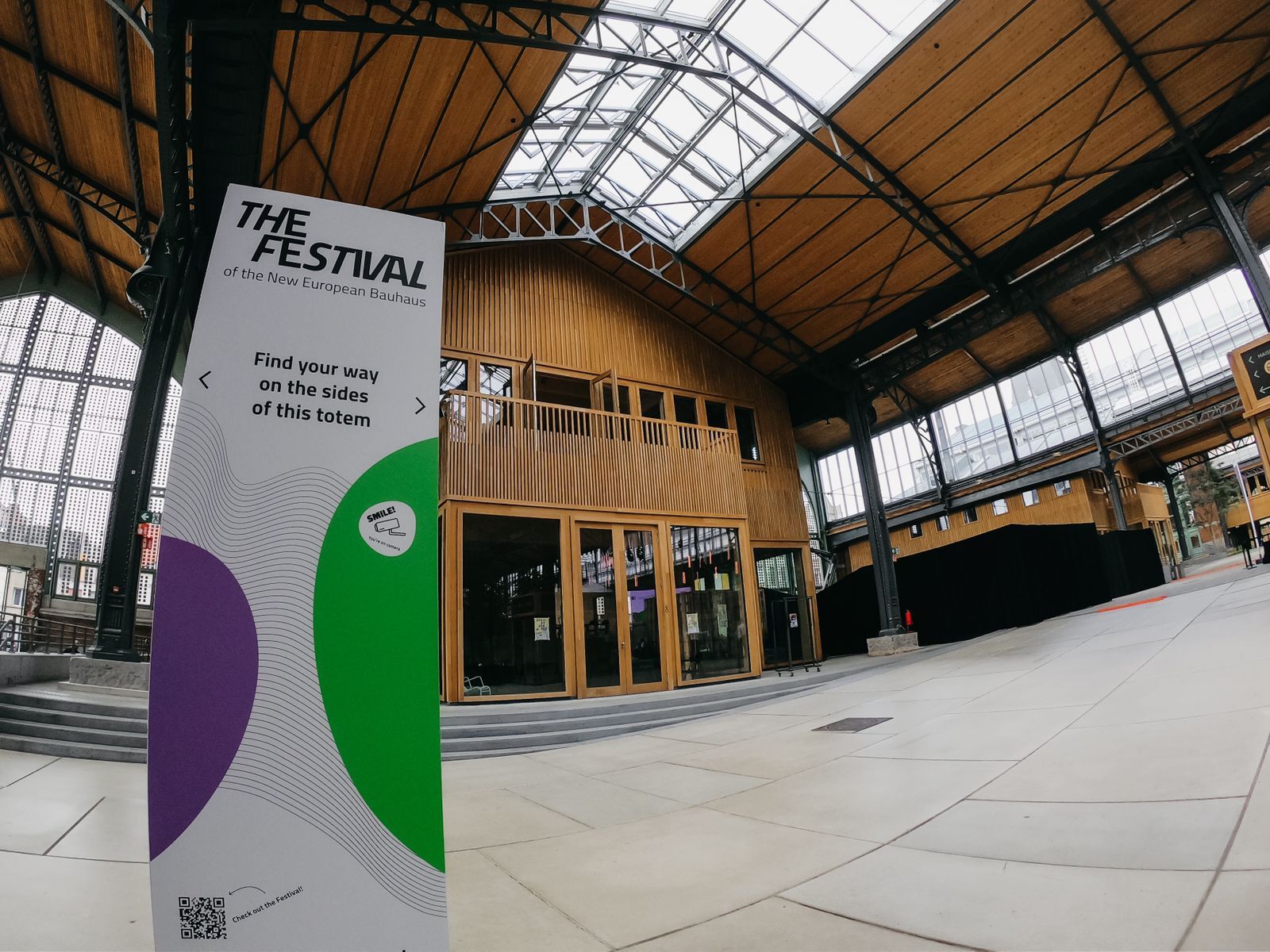 After successfully engaging with some of the exhibitors including IBA, a project from the Greater Region, that aims to transform space and society with the help of urban architecture and urban planning, and SUPERBARRIO, a project from Catalunya that engages citizens in the design of public space, we went off to our next destination: Place de la Musique. This was our first stop with the Mobile Fair and also the first interactions we had with the public, drawn in by our unique advertising...on two wheels, thanks to Velocom! Aesthetic? Check. Eco-friendly? Check. We were for sure keeping up with the theme of the Festival! 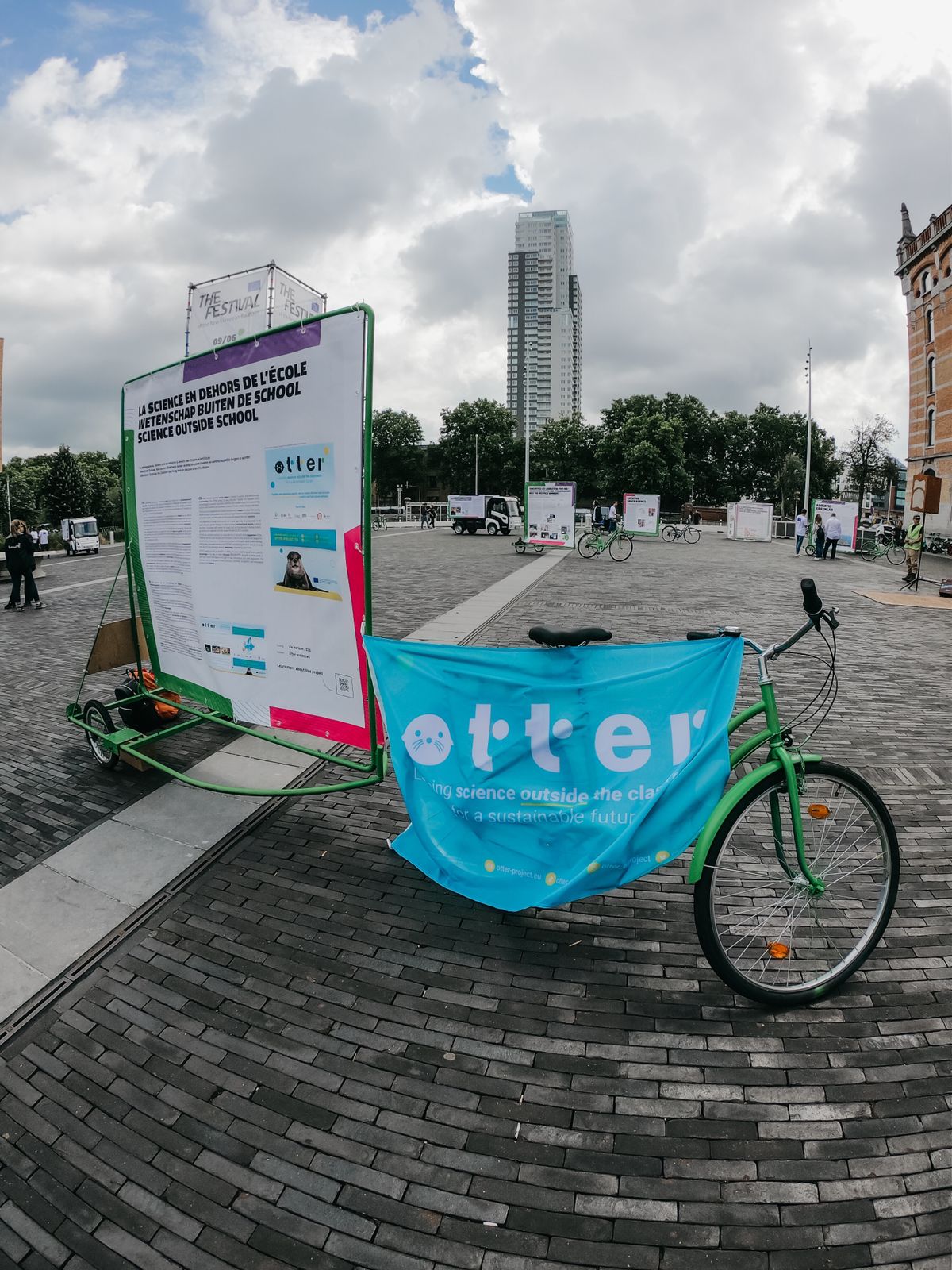 "The heart and soul of the European Green Deal", this is how Ursula van der Leyen, President of the European Commission, summarised the New European Bauhaus movement, in the Official Opening of the event, which we were able to attend in the Forum. The ceremony went on with an open invitation to take part in this cultural and urban revolution from Roberta Metsola, President of the European Parliament: "Whether you are an engineer, a student, an artist, or anyone who believes in a durable, sustainable future, join us in celebrating a new creative movement".

In the afternoon, we found ourselves at our second venue of the Mobile Fair: Mont des Arts, where we could truly see the scale of the Festival, which went beyond just the exhibition. Various workshops were being held on both sides of the squares: from calligraphy to drawing and wood crafting, there was something there for everyone to try out! Apart from this, a stage was set up as the scene for the Festival's cultural acts. As for us, we were happy to network with the other exhibitors (among which were Station Europe, working on initiatives that drive social change, and RECOMS, a fellow H2020 project working to improve communities' resilience) explaining OTTER and its objectives, and giving out yoyos, which ended up being quite possibly our most successful piece of merchandising ever! 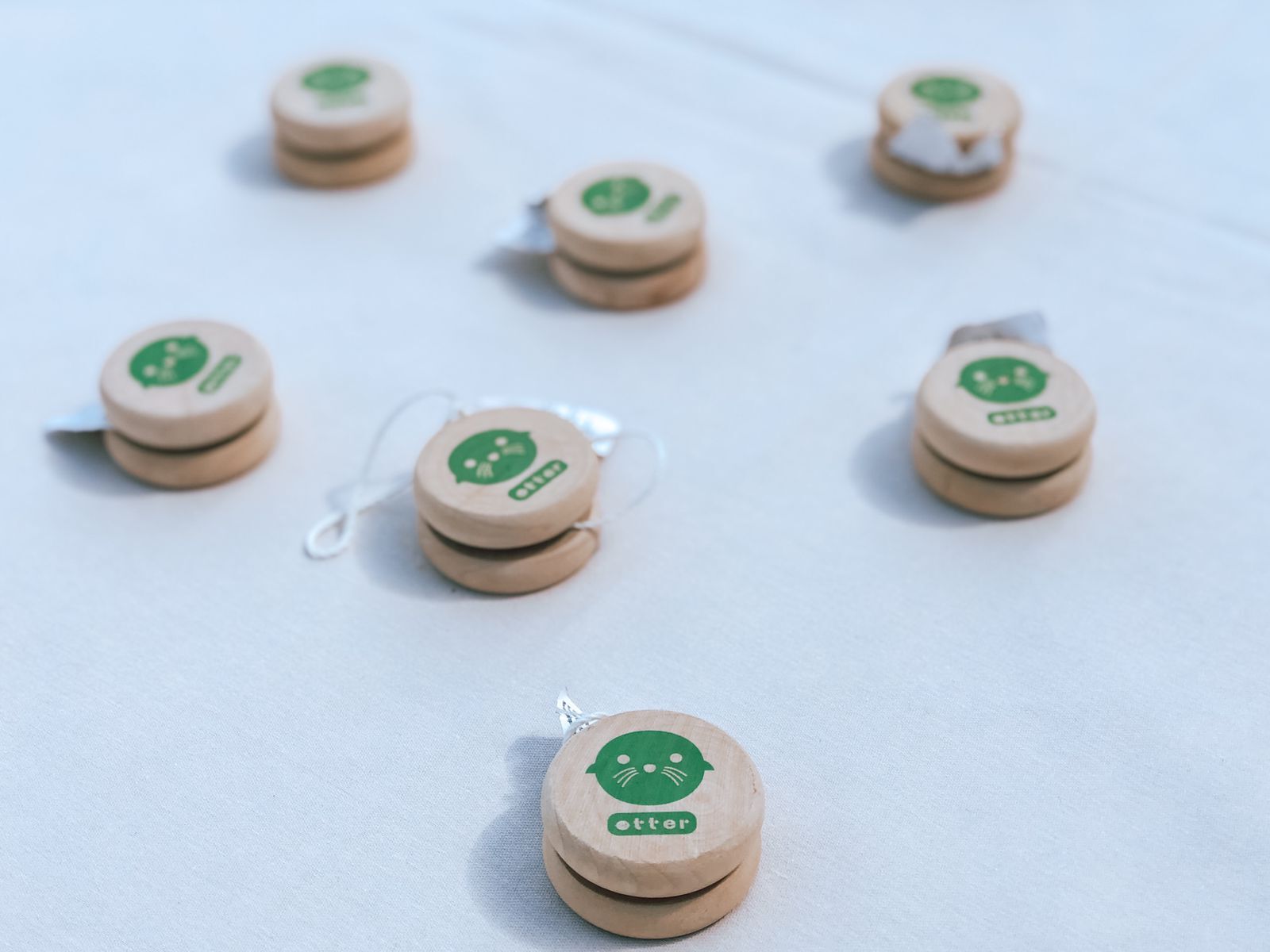 We ended our first evening at the New European Bauhaus Festival with a contemporary dance performance that had us hooked...and we think we took some of that great energy with us since, on the next morning, we couldn't wait to start a new day at the Festival!

This time, we went back to the Gare Maritime, where we signed up for a panel discussion on the role of education in our new vision of Europe. In OTTER, we believe in the power of education to change our world - which is exactly why we set out to teach children, via Education Outside the Classroom, how to bring about positive change and how every small action can have an impact (in this case, reducing plastic use can lead to less environmental damage). The critical function of education as the main catalyst for changing mindsets and making our world better was also highlighted during the discussion moderated by Sneška Quaedvlieg-Mihailović, Secretary General at Europa Nostra.

After the panel discussion, we moved to our third location: Place de Brouckère this time. The clouds and the occassional wind did not manage to interfere with our plans to promote the project in front of the bruxellois. We met many people, from all walks of life, at various ages, from science teachers who were curious to learn about the OTTER Labs, to children who acknowledged the need for such a project (considering their own dissatisfaction with how STEAM subjects are taught in traditional schools), from tourists who were attracted by the Festival buzz, to locals who wanted to see what projects are funded by the European Commission. We also took part in an workshop organised by COMPOSE on the topic of energy planning liaised with our fellow exhibitors. Last but not least, we conducted around 20 interviews with visitors to our booth, asking about their hopes for a reimagined Europe and their opinion of Education Outside the Classroom (the videos will be published soon!). In the evening, we again joined the activities at Mont des Arts: a discussion on sustainable fashion and a concert by an Ukrainian pop-folk band. 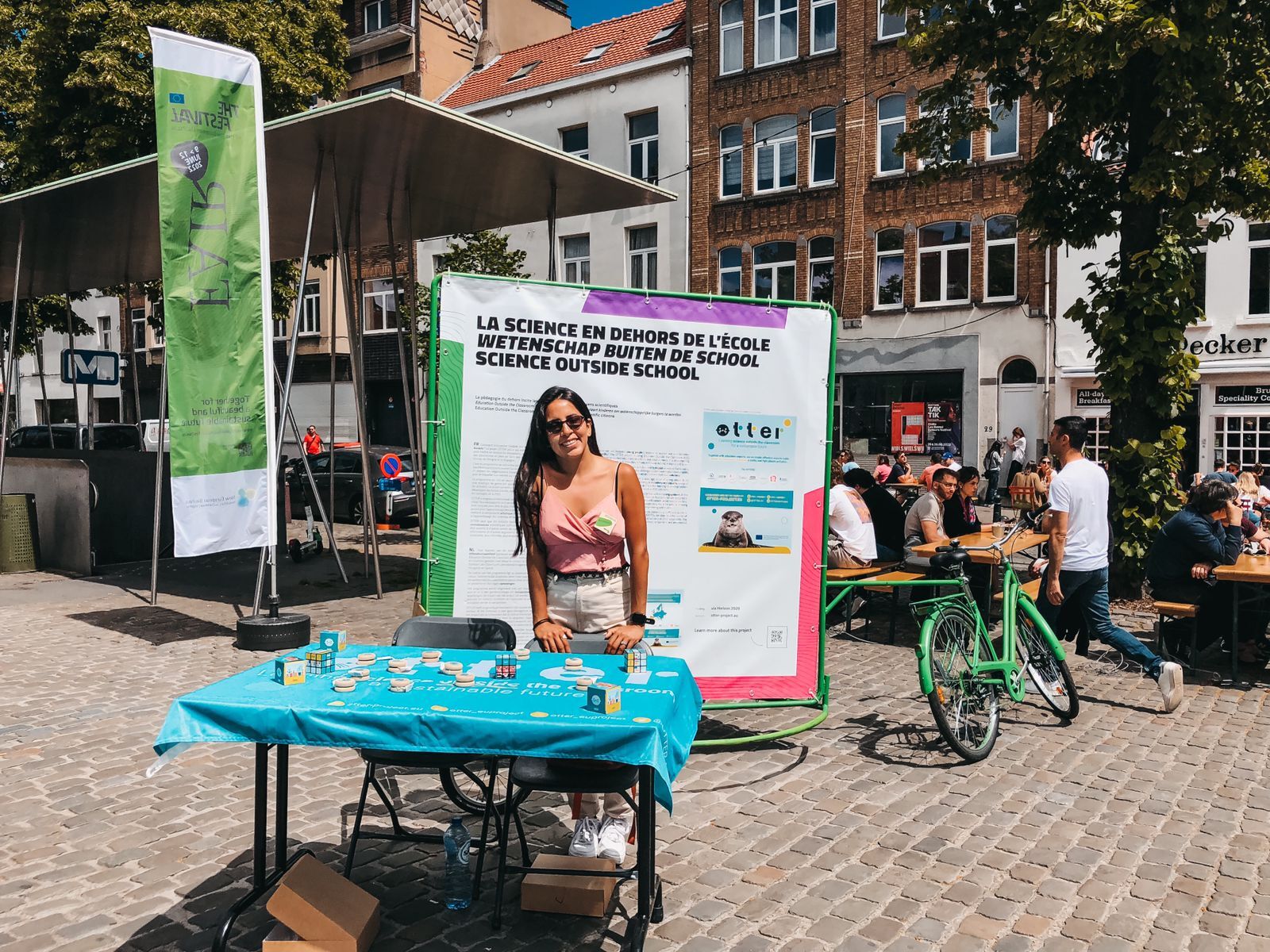 Our third day at the Festival of the New European Bauhaus also meant our last chance of explaining OTTER and spreading the word about its goals to the public, so we took that very seriously! Firstly, we joined the Forum for a panel discussion on how science, art and technology can come together to create the Europe of tomorrow and address the challenges we are confronted with today. We then went to set up our OTTER corner in the Festival's fourth location: Marche Aux Poissons, a lovely area surrounded by outdoor cafes and a pop-up flea market. Similar to the previous day, we received many guests who were eager to find out more about the benefits of outside the classroom education, the activities we want to implement with kids, and the opportunity to join network of educators, teachers, and experts: the OTTER Hub.

All in all, it was a very productive event for us OTTERs, full of meaningful encounters, compelling discussions, and the emergence of a new vision for Europe: enriching, sustainable, inclusive.